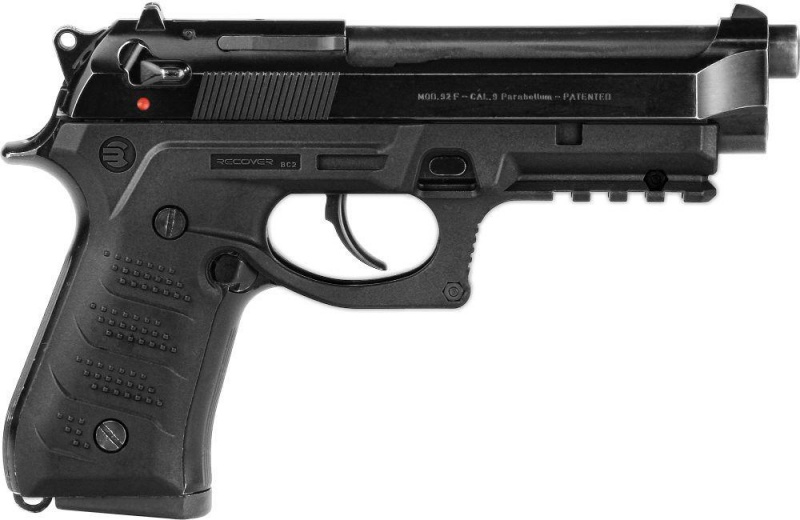 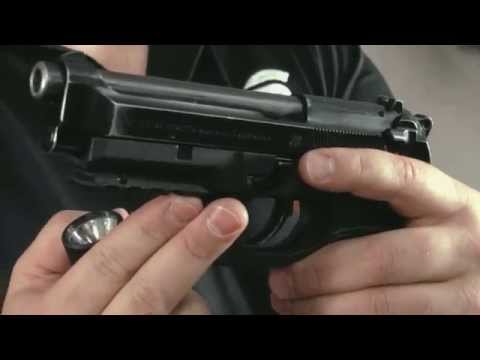 BC2 Beretta 92 Grip and Rail System

Code:  365P-BC2
(1 review)
The Recover Beretta Grip and Rail Systems have proven to be the most stable rail solutions on the market as well as the most popular, and are easily installed on your gun in under 3 minutes. The high-grade, lightweight, glass reinforced polymer Recover can be installed without the need for a gunsmith, and requires no permanent modifications to be made to your firearm. The BC2 is the most stable rail mount on the market and the added benefit of a Beretta grip enhances the look of your firearm.
59,95 € z DDV
Retail price:
Purchase and get 49
Select color:
Vse
14
Black
22
Coyote
21
O.D.
add to cart
Send a request
DESCRIPTION
REVIEWS (1)
Did you purchase this product? Write a review and get 20 AMMO points. Collected ammo points can be used to get discount on future orders.
Frequently Asked Questions:

Q. Are the BC2 grips fatter than standard grips?
A. They are not any thicker than standard grips
Q. Are there fit issues with the Italian 92FS?
A. Fit issues with the Italian 92FS have been resolved
Q. Will these work on a Taurus?
A.  These will work on all full sized Beretta 92/M9/96 or Centurion only, they will not work on any other guns and we do not make them for anything other than the Beretta 92/M9/96 Centurion and the full sized 1911
Q. Are these sturdy enough to handle a light and hold 0?
A. We offer a lifetime warranty on these for a reason, they will hold 0 with a laser mounted and are even sturdy enough to use in conjunction with an upper rail
Q.  I am concerned that these will damage my gun
A.  There is no way for these to damage your gun, we use the same glass reinforced polymer that most firearm manufacturers use to make their pistol frames. 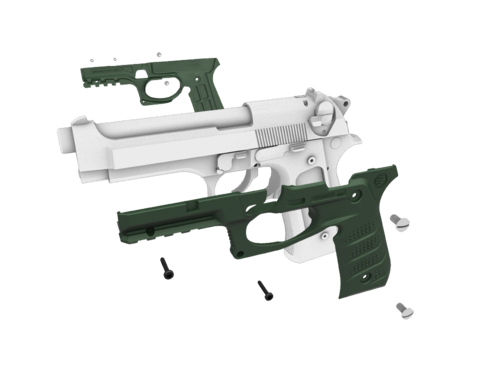 For the past two or three years, my Beretta M9 has almost exclusively performed regular nightstand duty. Of all my handguns, the M9 has been fired the most and (contrary to most gun owners) I love the decocker and double-action first trigger pull for a defensive sidearm. Despite these advantages, I did not consider the importance of having a light on my home defense gun until very recently. Because my M9 did not come with a railed dustcover, I needed to find a palatable aftermarket option that could add a durable and secure rail to the firearm. Since I plan to retire the M9 from nightstand service at some point, I also did not want a permanent rail or anything that would be overly expensive.

After some brief research, the ingenuity of ReCover Tactical’s CC3 railed grip caught my eye. The idea of a grip and rail combination seemed novel and obvious at the same time. I was excited to see that ReCover Tactical was working on a Beretta model, dubbed the BC2, and I decided to jump on the grip as soon as it became available. I have now had the grip for a couple of months and can share a few details about its execution

One of the main selling points for the BC2 is that the system can be installed very easily. In the package, ReCover Tactical includes an Allen wrench that works with the original Beretta grip screws and is also compatible with the two cross-bolts that join the front halves of each panel. To install the kit, first use the wrench to remove the stock grip screws and panels. After the original grips have been removed, take one half of the BC2 system and, using the original grip screws, secure it to the frame of the handgun. Do the same for the opposite side so that both sides of the grip now have panels. Next, push one of the included bolts from the left side of the unit to the right through the hole near the trigger guard and secure it with the included wrench and nut. The same must be done for the hole at the front of the BC2, near the rail. Once these steps have been completed, the unit should be very secure on the firearm and ready for action.

After much deliberation, I opted for the Olive Drab BC2 grip kit. Typically, colored guns and dual-tone pistols are two types of firearms that I try to avoid. While I find many such firearms to be quite pleasing aesthetically, the permanence offered by a colored frame or slide almost terrifies me and is wholly incompatible with my indecisive disposition. Interestingly, this is exactly why I chose the OD version of the BC2. As we covered earlier, installation and removal of the grip system is very simple, meaning my choice was far from a permanent one. If I do grow tired of the OD version of ReCover Tactical’s system, I can always pick up a different color or paint my current set with little concern. The BC2 is consistent in hue with other OD accessories, such as those from Magpul and the color works well here in the Midwest/Ohio Valley. I also like that the matte finish on the grips is similar to the original Beretta panels, which ensures that they remain understated and prevents them from detracting from the attractive Beretta handgun.

My appreciation for the coloration of my BC2 set does not necessarily extend to the stippling and overall profile of the grips. I acknowledge that certain concessions must be made when adding an accessory over the top of a preexisting frame, but the BC2 is somewhat of a departure from the svelte beauty of the Beretta 92 series. The sweeping trigger guard and sectioned stippling of the grip panels comprise an almost sci-fi sort of outfit for the handgun. I am not sure ReCover had many options as far as the trigger guard is concerned, but more neutrally textured grip panels would have been an improvement and might bring more Beretta purists to the BC2.

Possibly the most important feature of the BC2 is the accessory rail at the front of the system. Without a working rail, the whole package is simply unnecessary bulk added to an already hefty pistol. Fortunately, the Picatinny rail is well within specifications. I had no problems in mounting my Streamlight TLR-1HL to the BC2 and the light has shown no signs of loosening. Pulling down on the light will cause the rail to flex some, but the sort of force required to actually break the rail would probably also destroy any accessory mounted to it.

One area of minor concern is that the section of the grips that covers the slide lock lever was a little snug at the start. This prevented the Beretta from locking the slide back on an empty magazine. Fortunately, fixing the issue was as simple as sanding the inside of the BC2 near the lever. When it comes to accessories like this, slightly oversize or tight is always preferable to loose or sloppy fit. End users can easily remove material, but cleaning up slop is rarely feasible.

Few BC2 owners mention another compelling feature of the grips that I feel is worth discussing. One of the potential weaknesses of the Beretta 92 series is the exposed trigger bar on the right side of the firearm. If mud and dirt become lodged in this mechanism, the whole handgun can become non-functional. Fortunately, the BC2 covers the bar entirely. While it is possible that contaminants could seep under the BC2 and into this area, the close fit of the grip allays any concerns I have.

Picking up the BC2-equipped Beretta for the first time can be a bit startling. The grips technically add very little width to the firearm (1.370” wide with original panels versus 1.393 with the BC2), but the handgun initially felt somewhat foreign to my hands. The first apparent change was that the grips felt much fuller to me. This is probably because the front edge of the panels blends better with the contour of the Beretta’s front strap than the original grips. Another notable difference is that the raised stippling of the BC2 is much sharper than the diamond checkering of the original panels, which translates to a slightly better grip surface. Although the BC2 is really unnecessary if used with a bare rail, the front of the trigger guard is grooved for those who like to wrap their index finger around this spot. On the less pleasant side of the ledger, the swooping area of the trigger guard near the magazine catch has a sharp edge that irritates my middle finger after extensive shooting.

Contrary to my statements in my initial impressions article, the BC2 is not made of ABS or similar plastic. Rather, the panels are molded of nylon similar to the kind used in Glock, Smith & Wesson, and FN frames. This is an important detail because nylon is generally far more temperature and solvent resistant than most other common polymers, including ABS.

Beyond the inherent qualities of the material, the BC2 is well reinforced in potential breakage areas. The rail is appropriately supported by the dustcover section of the system and the trigger guard seems capable of taking a substantial beating without issue. While the grips feel flimsy out of the packaging prior to installation, once they have been firmly affixed to the Beretta, the package comes together very nicely.

Holster availability is perhaps the biggest factor working against the BC2. As of now, there are no hard-sided holsters for BC2-equipped 92 series handguns. To my knowledge, the only existing options are generic soft holsters for accessorized pistols. These holsters often lack the excellent retention characteristics of quality rigid holsters and they do not protect the handgun (and trigger) as well.

Fortunately, ReCover Tactical is working to develop the HC92 holster for Berettas with BC2 systems installed. Like their HC11 holster for 1911s, the HC92 will accept “recovered” 92 series handguns sporting any of the popular lights or lasers. I am curious to see how this is accomplished while still adequately protecting the trigger. I will be receiving the HC92 from ReCover Tactical as soon as they are available and I plan to review it shortly after arrival.

Despite my positive feedback for the BC2, I do want to make it clear that I would not intentionally purchase a non-railed handgun with the intent of adding a ReCover Tactical kit after the fact. If a rail is a priority, it is always best to grab a gun that includes one from the outset. Not aftermarket rail can match the durability and stability of a molded or machined mounting surface. However, for those of us who already own firearms with smooth dustcovers, ReCover Tactical’s new systems offer another option that frankly is better executed than most other aftermarket rails. The affordable $50 price tag and easy installation should appeal to those on a tight budget or shooters who fear the permanence of other add-on rails. As a mounting place for lights and lasers, the BC2 works well and is surprisingly durable for a polymer part. While the BC2 is not perfect ergonomically and I do wish that it meshed better with the aesthetics of the M9/92FS, it is not a significant downgrade from the stock grips and does not substantially detract from the soft contour of the Beretta’s grip. For shooters looking to add a rail and light to a Beretta already in the safe or nightstand, I would comfortably recommend the BC2 from ReCover Tactical.
Write a review
Only logged users can write a review.