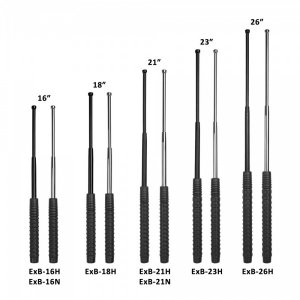 This type of baton can be opened by swinging the handle into a free space or by pulling out the tubes by the baton’s tip. The locking mechanism then fixates the tubes into the expanded position. The best feature of this baton is the closing method.

The tubes can be then easily pushed back inside the handle. The baton can always be closed easily and effortlessly, no matter the force with which you swung the baton open. There’s also no need to look for any hard surface you would need to close a friction lock expandable baton.

The lock is released when you press the button at the end of the handle and push the baton tip inward.

The baton can be closed only with the button located at the end of the handle. It is not possible to close it by pounding it on the ground – that might only damage it.

The black nickel-zinc surface treatment of the baton’s telescopic tubes ensures their resistance against scratching.

During fall tests the baton was dropped from a 2-meter height on concrete (the German standard requires only wood, which is a much softer surface) and it was then possible to close it as smoothly as before. We have opened and closed the baton 6000 times and it still works properly. The locking mechanism was tested repeatedly by dropping the baton into the mud.

Professional swiveling holder for this baton can be supplied as an optional accessory for an additional cost. Thanks to its unique patented construction it enables a very quick drawing of the baton just with one hand. The holder is made from highly resistant plastic.

Due to the button located in the baton ending, it is not possible to add any accessories to the baton handle. Only detection mirrors M-2 and M-3 can be fitted onto the baton.

We produce the baton with two types of endings:
a round ending, which is more compact
a triangular ending, which prevents the baton from rolling away on a smooth surface